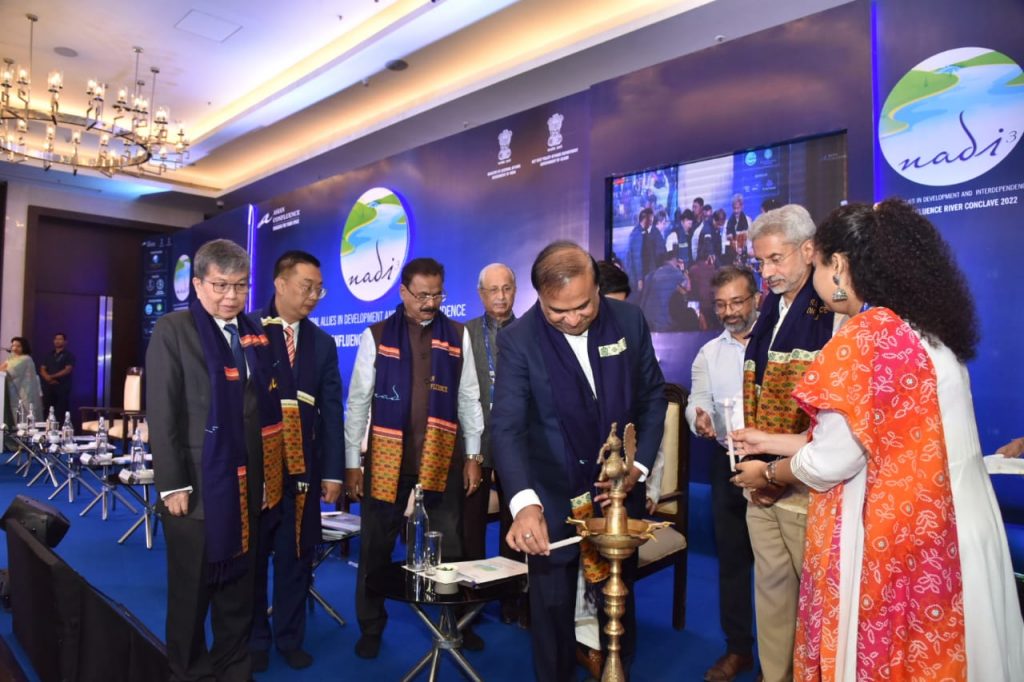 A two-day international river conference was organized in Guwahati, Assam, on May 27-28 by a Shillong-based think tank Asian Confluence. It was the third edition of the Natural Allies in Development and Interdependence (NADI) conference. Organized in partnership with the Union External Affairs Ministry, Act East Policy Affairs Department of the Assam government, North Eastern Council, and other partners, the annual event was an attempt to deliberate and develop a “collective vision of cooperation in the Bay of Bengal and the Southeast Asian region.”

Speaking on the occasion External Affairs Minister S Jaishankar said, “Diplomacy isn’t just about wordsmithery. It’s about connectivity, contacts, and cooperation. Participation of Bangladeshi counterpart highlights his nation’s role in this regard and presence of Japanese colleagues brings out the catalytic role that Quad partners can play.”

A product of Air Force School, St. Stephens, and JNU and having studied among other things Nuclear Diplomacy, Jaishankar’s over three decades in the Indian Foreign Service makes him utterly enviable. He is a huge asset to global diplomacy. In difficult times like now when India’s position is increasingly being questioned on issues ranging from the Russia-Ukraine war to food security, Jaishankar’s articulation of India’s stance has been a balm on flayed egos. He brings grit, sophistication, incisiveness, experience, and the goodwill of trusted friends in international diplomacy to his job.

It’s in this context that Jaishankar’s articulation of diplomacy as more than “wordsmithery” is spot on. He can’t be more right when he says diplomacy in today’s world must cover the issues of “connectivity, contacts, and cooperation.”

China occupies a vast tract of land across Northeast border, What’s the level of connectivity between these state capitals? What about road connectivity beyond Indian borders into Myanmar, Bangladesh, and China? In fact, there is no connectivity at all if we take the modern definition of connectivity — Expressways and 5G.

After the takeover of Afghanistan by Talibans, India’s North-East has the potential to give another Hong Kong if only we gave due importance to connectivity, contacts, and shared cultures.

In this respect, some of the initiatives are worth taking note of. From June 1, the third India-Bangladesh Train Mitali Express will begin serving the people of the two countries. The train services between India and Bangladesh had remained disrupted for over two years and have recently resumed.

In a significant development, Bangladesh has allowed Indian North-Eastern states to use Chittagong Port for their third-country shipments. It cuts the distance to the port for shipments from N-E states to 400 km compared to about 1600 km in the case of Kolkata ports. The talks on this have been on since 2015 and an agreement was arrived at in 2018.

Similarly, opening the border with Myanmar will not only allow the people of this region to enjoy more of the shared heritage but also offer a land route to several other South-East Asian countries – “a world all the way to Vietnam and Philippines, from Haiphong to Hazira, and Manila to Mundra.”.

“We used them, dominated them, leveraged them, we blocked them; these have been society’s ups and downs over time. We carry forward our deliberations bearing in mind that connectivity, commerce, culture, collaboration, and capacity are the core objectives of the Asian conference,” the Indian foreign minister said at the event.

But the idea of Asian Confluence is not just about roads and waterways. It’s about “power bridges and data corridors, education and tourism, and energy flows and cultural context. Anything that connects is connectivity.”

Instead of regarding North-East as a frontier, it has the potential to emerge as a commercial and economic hub. It means a complete transformation of the regional economy and visualizing the Northeast as an economic powerhouse like Gujarat for industries and Bangalore for the I-T sector.

“A road connecting Sikkim with Nepal via the Chiwa Bhanjyang border is also under construction as part of India’s border area development programme. With its completion, Sikkim will have access to Nepal’s East-West Highway, with a boost to trade and tourism in both countries,” the Indian EAM informed at the event. (IPA Service)

Muslims May Resort To Gandhian Mode Of Satyagrah To Fight Hindutva
Posting....