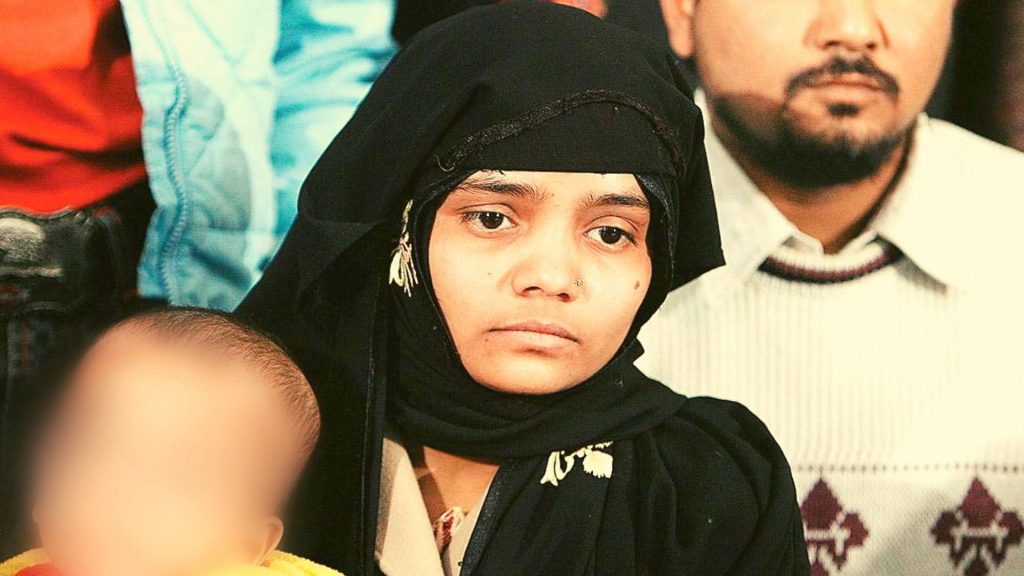 Monday, the eleven   persons   who gang-raped Bilkis Bano during the 2002 Gujarat communal riots walked free. The panel that let them off called it “remission”, which is different from “relapse”. And, with these ’11’, you never know when they’ll have a relapse. Anything is possible with a rapist on the loose. In this case, ’11’ rapists on the loose, unpardonable pardons hanging from their britches.

When told of the ’11’ on the loose, Bilkis Bano couldn’t believe her ears. One news report said she broke down, and then clammed up, going silent as the grave. The ’11’ had not only gang-raped Bilkis Bano, but they had also murdered 14 family members, with the most horrible death reserved for her 3-year-old daughter.

The toddler was swung by the feet and smashed to death on the floor. The ‘Gujarat Panel’, which set free the ’11’ on remission, was of a different bent. Hard to believe, right? But, reports say, the Centre was against “remission”. Meaning, Prime Minister Narendra Modi didn’t want the ’11’ to walk. Again, hard to believe!

Truth is, there are too many ‘hard to believes’ attached. It is as if Bilkis Bano deserved the worst for some unknown reason(s). And they’re not finished with her, yet. The least the ‘Gujarat Panel’ could have done was to extern the ’11’ to outside the state—tadipar! Like it was done to somebody who these days holds the keys to jails India-wide.

Bilkis Bano’s husband Yakub Rasool says his wife wants to be left alone, enough is enough. When convicts can walk, who dares to talk! The battle was fought, won, and lost again. Hard to believe, but whoever was it who thought a sentence of life-imprisonment would be like a walk in the sun!

The sequence of events runs thus. In May, the Supreme Court told the Gujarat government to decide on the remission for the ’11’. Enough time had passed for everybody to forget Bilkis. That she was brutalized; that she had witnessed the murder of her three-year-old; that she was violated multiple times by multiple men, nothing counted.

And now she has been reminded with the brutal remission that nothing at all mattered. It is hard to believe the ‘11’ have been let go for “good behaviour”. Of all the remissions, this one takes the cake! But then, wasn’t this the same SC which let go the rapist-murderer of a 4-year-old with the words that “every sinner has a future” to nurture.

It’s a miracle that despite such extraordinary judgments, our courts do not suck. Sujal Mayatra, district magistrate of Panchmahal, headed the Jail Advisory Committee (JAC) that handed out the “remission” to the ‘11’, a unanimous decision. The ‘11’ had completed 14 years in jail. Time to go home!

Wasn’t Lord Ram also given a remission of sorts after 14 years in forced exile? The good behaviour of the ’11’ had been taken note of. In the other democracy, the ’11’ wouldn’t have seen sunrays for the rest of their lives. And they would have gone home feet first, flat on their backs.

But here, in India, it’s hard to believe that Sujal Mayatra’s JAC was so lenient, just and fair! This was a premature release, no doubts on that. But it helps that the ‘11’ are now free to witness first hand “democracy in action”, the Gujarat elections. The ‘11’ walked out of a sub-jail and were welcomed and feted by men of their faith at the gates of the sub-jail they had just then exited.

The ’11’ looked like well-preserved human specimens, none the worse for wear after the more than 14 years they were behind bars. Penance for gangrape and 14 counts of murder, besides the slaughter of a three-year-old. Sujal Mayatra couldn’t have chosen his sinners to let go free better.

The ‘11’ now say they were innocent and were “victims of politics”. Politics, however, has many faces. There could also be politics behind the remission and release. Also, the BJP government is up to funny things, incongruous things. Monday evening, the Modi government gave a sort of remission to the much-maligned Rohingya “refugees”, the same “termites” that Home Minister Amit Shah wouldn’t give the time of the day to.

The Rohingya will henceforth live in “pucca EWS houses”, will be provided with all amenities entitled to “refugees”, and also “24/7 police protection”. Kashmiri pandits are green with envy as they get killed helter-skelter. Appears like the Modi government is making amends for CAA, and because ‘Rohingya Lives Matter’ for ’Pasmanda Muslims’, who happen to be Prime Minister Narendra Modi’s latest muse. In Gujarat, which is all set for polls, and where AAP is a challenge, Hindu lives, and Hindu votes, matter. Therefore, the remission, and Sorry Bilkis! (IPA Service)