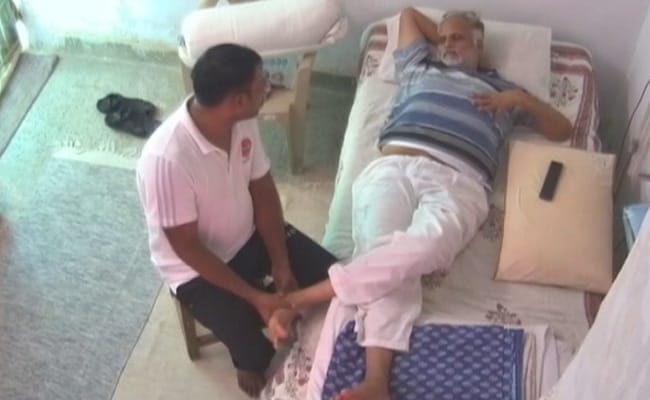 In a new twist to the row over viral videos of Delhi Minister Satyendar Jain getting massages in jail, Chief Minister Arvind Kejriwal’s claim that these were “physiotherapy” has been denied by official sources who say the “masseur” in the video is a prisoner in a rape case.

The man giving the AAP minister a massage in the security video is Rinku, a prisoner charged with rape under the stringent Protection of Children from Sexual Offences (POCSO) law, according to official sources from Tihar Jail.

The videos, dated September 13, 14 and 21, are at the centre of a fierce row between the AAP and the BJP in the run-up to the Delhi civic elections next month.

Rinku is not a physiotherapist, according to Tihar Jail sources, and was arrested on rape charges last year.

AAP has not commented on the new revelation, which was seized by the BJP.

He was not a PHYSIOTHERAPIST BUT A RAPIST!

AAP defended this! They truly turned Tihar into Thailand!!! pic.twitter.com/5YZUi1STy5

On Monday, Arvind Kejriwal had strongly refuted the BJP’s allegations of VIP treatment to Satyendar Jain, saying the viral video was of the minister receiving “physiotherapy”, not “massage”.

“They are calling it a massage and VIP treatment, but it’s merely physiotherapy,” Mr Kejriwal told reporters on the sidelines of his campaign in Gujarat’s Vadodra.